Sonardynes Ranger 2 Ultra-Short BaseLine (USBL) underwater tracking technology is to provide improved support to critical oceanographic work from the research vessel Atlantis, including science expeditions in the human occupied submersible Alvin. The most updated version of Ranger 2 provides greater precision, speed and range tracking and replaces the existing Ranger 1 system, which has been supporting research from the ship since 2009.
Additional upgrades include a new AvTrak tracking and telemetry instrument for Alvin, to support the increased depth rating of the submersible, from 4,500 m to 6,500 m. This bespoke 10,000 m-rated AvTrak meets the requirements for a 1.5 times safety margin for human-occupied submersibles.
The Ranger 2 system will support the Atlantis work by enabling science teams to precisely monitor the position of submersibles and other underwater platforms deployed from the vessel, including remotely operated vehicles (ROVs), autonomous underwater vehicles (AUVs), as well as tracking its CTD (conductivity, temperature and pressure sensor), towed sleds and dredges, in all water depths.
The team on the Atlantis will also be able to use Ranger 2 to communicate with scientists onboard the Alvin throughout every stage of a dive via the AvTrak using the secure Sonardyne Messaging Service (SMS) feature. The AvTrak can also act as a relocation beacon for the Alvin, as well as remotely operated vehicles (ROVs) deployed by the Atlantis.
The Atlantis is also upgrading its through-hull transceiver from a High Performance Transceiver (HPT) 5000 to a Gyro USBL 7000, complete with a new gate valve, flanges and sea chest.
Gyro USBL combines the vessel heading, pitch and roll data thats critical to USBL system performance, with an acoustic transceiver  all in one housing. Atlantis will be equipped with the latest generation Gyro USBL, which it 30% shorter and 40% lighter than its predecessor. That means its easier to handle and install so more vessels, including small vessels of opportunity and unmanned surface vessels, can get the best performance from their USBL system.
Owned by the US Office of Naval Research and operated by Woods Hole Oceanographic Institution for the benefit of the US oceanographic community, Atlantis is one of the most sophisticated research vessels afloat. The vessel was specifically outfitted to act as a mothership for Alvin and can accommodate up to 24 scientists working in six labs for up to 60 days at sea.
Atlantis is part of a class of similar Navy-owned research vessels, which includes the University of Washington operated research vessel Thomas G. Thompson, which is also fitted with a Sonardyne Ranger 2 Gyro USBL system.
Kim Swords, Senior Applications Engineer, for Sonardyne in North America, says, "Were delighted with the through-life service that Ranger 1 has delivered to the Atlantis marine and science. This upgrade sees the Atlantis join the Thomas G. Thompson and a global fleet of scientific research vessels in being equipped with Sonardynes most up-to-date USBL technology available.
Sonardynes Gyro USBL completes the Ranger 2 package onboard the research vessel Atlantis. 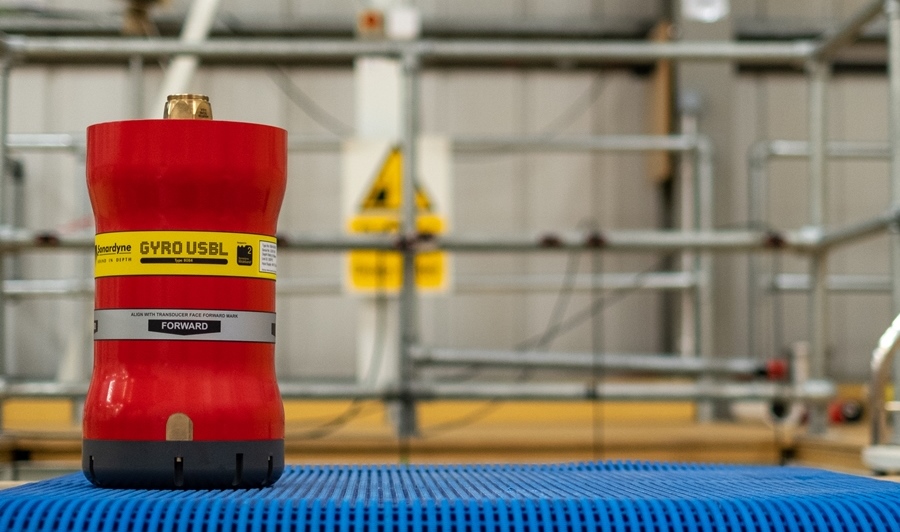