3D at Depth Inc, the world's expert in commercial SL Subsea LiDAR laser technology, announces the acquisition of a fully integrated Saab Sabertooth Hybrid AUV / ROV. The multi-million-dollar investment will complement 3D at Depth's SL Subsea LiDAR laser technology systems and 3rd party geophysical equipment, giving them an impressive spread of integrity measurement equipment.  The system will expand the company's capabilities while simultaneously exceeding even the highest of client expectations in the Gulf of Mexico region and beyond. Industry enthusiasm surrounding this breakthrough service offering is extremely high and rising due to the SL Subsea LiDAR laser technology allowing 3D at Depth to stand out with autonomy.
"The Hybrid AUV / ROV coupled with 3D at Depth's patented SL Subsea LiDAR laser with remote sensing technology adds an extra layer of measurement and repeatability. In addition to normal offshore integrity inspections, deploying a customised Sabertooth positions 3D at Depth firmly as a market leader and helps kick start the digital representation market at an affordable cost to owners and operators," commented Neil Manning, Chief Operating Officer at 3D at Depth. "Fast and focused leak hunting is now possible while generating a detailed integrity review in a parallel vessel that also undertakes other operations (SIMOPS). Data harvesting from a vehicle with the agility of a Sabertooth during SIMOPS has been an ambition we have had as a business for some time. I'm excited to show this product because this is what 3D at Depth is about as a technology-focused business."
Additionally, the Hybrid AUV / ROV is equipped as a containerised spread to transform any vessel of opportunity into a survey and inspection platform in less than 18 hours. This allows deepwater assets and offshore wind operators to reduce their costs, risks, and carbon footprint by lowering offshore man-hours, chartering a DP1 or above vessel, and reducing shipping costs by using our containerised spread.
Manning continued, "We are also seeing requirements for inspection campaigns to now include LiDAR technology and the use of our SL Subsea LiDAR laser technology allows us to provide a fully integrated cost-effective path to our customers while maximising vessel time (much faster than a normal work class ROV spread) on smaller footprint vessels thus reducing carbon emissions and cost."
The 3,000 meter rated dual hull Hybrid AUV / ROV is a hovering supervised addition that takes full advantage of 3D at Depth's patented SL Subsea LiDAR laser with remote sensing technology. This asset encompasses a tightly coupled class-leading inertial navigation package with fixed offsets to the sensor payload, which includes but is not limited to; 3D at Depth's SL3 LiDAR laser, Ultra-High Resolution multibeam echosounder, Sidescan sonar, multiple camera and light solutions, and a methane leak detection sensor.  Additional sensors for level 2 inspections such as cathodic protection and flooded member detection are available as optional additions. Furthermore, the sensor payload is fully integrated with customised electronics and software that allows the Hybrid AUV / ROV to act as one tool, enable one set-up, and ultimately require one mobilisation for multiple survey deliverables allowing for efficient and integrated operations.
According to the Company, its USBL acoustic positioning system and system communications come from a blend of industry-standard products with high track records in the marine environment for shallow and deep-water communications. This stable and capable platform enhances 3D at Depth's recently announced offshore Geophysical Survey Services division to provide optimised surveys to support medium to deep water (50m - 3000m) offshore development activities. The vehicle's stern also has a higher tolerance for currents with its low profile making it a useful tool for offshore windfarm work where currents are a factor in shallow water operations, and in other scopes including pre- and post- pipeline routes, environmental site surveys, offshore hydrocarbon projects, and civil engineering surveys.
3D at Depth's existing Marine Survey Services and new Geophysical Survey Services are greatly enhanced by having access to the Hybrid AUV / ROV. The Hybrid AUV / ROV being fully integrated with the company's custom software, electronics, and patented SL Subsea LIDAR laser technology greatly improves its usefulness and effectiveness, something which is sure to deliver great value to 3D at Depth's client base.
3D at Depth will host virtual and small in-person demonstrations that are respectful of COVID-19 in Houston during the month of June 2021. Interested parties are asked to express their interest in attending the demonstration by visiting http://bit.ly/3DatDepth-Demo 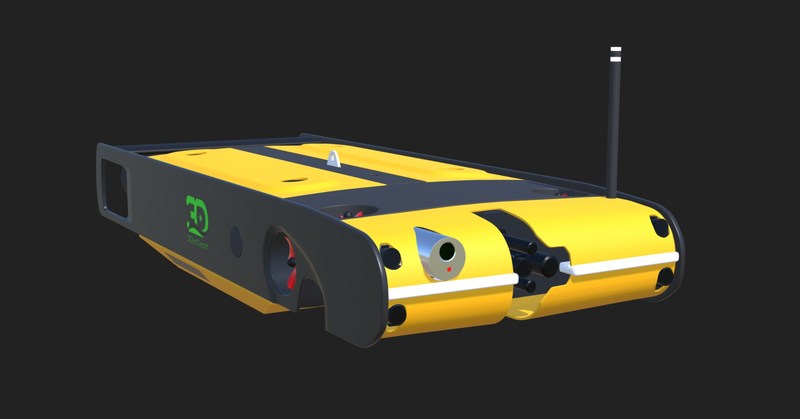