Oceanographic instrumentation developed by Sonardyne to monitor ocean currents has been acquired by the University of Rhode Island following its successful use in a US$2 million project in the US Gulf of Mexico.
The project, led by the University of Rhode Island (URI), saw an array of specialist sensors, including Sonardynes Pressure Inverted Echo Sounders (PIES), deployed for two years, to monitor the hugely disruptive Gulf Loop Current.
Sonardynes PIES were installed in waters down to 3,500 m depth early in 2019, to help better understand the current. Following successful wireless acoustic data harvesting campaigns from the instruments in 2019 and 2020, their deployment was extended to the end of May, this year.
Funding for the project, from the US National Academy of Sciences (NAS), was also extended, allowing URI to purchase the Sonardyne PIES used on the project outright, as well as a Dunker 6 telemetry transceiver, for wireless data harvesting from the instruments when they are on the seafloor. This will allow URI to use the instruments on its future projects.
The Gulf Loop Current system is a highly energetic ocean circulation feature that influences all ocean processes in the Gulf and is characterised by disruptive Loop Eddy events that have serious impacts on a wide range of human and natural activities, from oil exploration to coastal eco-systems. However, knowledge of its underlying dynamics has been limited, leading to this study, led by Kathleen Donohue, Project Director and Professor of Oceanography at URI.
PIES work by transmitting an acoustic pulse from an instrument on the seabed upwards. The pulse is reflected off the water-air boundary at the sea surface and returns back down to the seabed where it is detected by the PIES. This enables an exact measurement of the two way signal travel time to be calculated. At the same instant, an accurate measurement of depth is made using highly precise internal pressure sensors.
Combining data from an array of PIES instruments and near bottom current meters with historic water profile data can be used to calculate currents throughout the full water column over an extended area  in this case totalling over 50,000 sq km. For this project, Sonardyne enhanced the instruments with an integrated single point current meter, tethered above the units, leading to a modified designation as CPIES.
Randy Watts, Professor of Oceanography at URI, says, "The ability to receive the full time series of measurements plus engineering-performance checks via acoustic telemetry in 2019 and 2020 shows that the data are of high quality. The impressively low battery drain meant we could leave the CPIES untouched on the sea floor for the duration of our experiment. With the additional funding, we were also able to extend our observational window to nearly two years. This is important because each Loop Current Eddy formation is unique.
"The Loop Current encounters different pre-existing eddies and different bottom topography in different locations with different inflow from the Caribbean and different wind fields, says Professor Donohue. "These events inside the ocean are dynamically analogous to weather and storms in the atmosphere  and every bit as varied. Observing these many events and observing the full water column is highly valuable information to guide the forecast models.
"Looking to the future, the telemetry capabilities of Sonardynes CPIES offer us an established way to collect the data at more frequent time intervals using an uncrewed surface vehicle (USV) and report it ashore to enable real-time forecasting of the entire Gulf of Mexico Loop Current System, adds Professor Watts.
Geraint West, Business Development Manager  Oceanographic, at Sonardyne, says, "URI have long been recognised as a leading proponent of using PIES to undertake large scale studies of ocean currents. Our collaboration with them has consequently taken our PIES technology to a new level, which were pleased to see being used in this important study. We look forward to continuing our close relationship with URI, including supporting more autonomous harvesting of their data.
URIs LCS study is being funded by the US National Academies of Sciences, Engineering and Medicines Gulf Research Programme, which was founded in 2013, as part of the legal settlements with companies involved in the 2010 Deepwater Horizon oil spill. The long-term objective is to improve forecasts of the Loop Current in order to increase the safety of operations in the Gulf.


Recording Sonardynes PIES, from 3,500 m water depth to the back deck of the RV Pelican, after a successful deployment in the US Gulf of Mexico. Photo by Maureen Kennelly, Marine Research Specialist at URIs Graduate School of Oceanography. 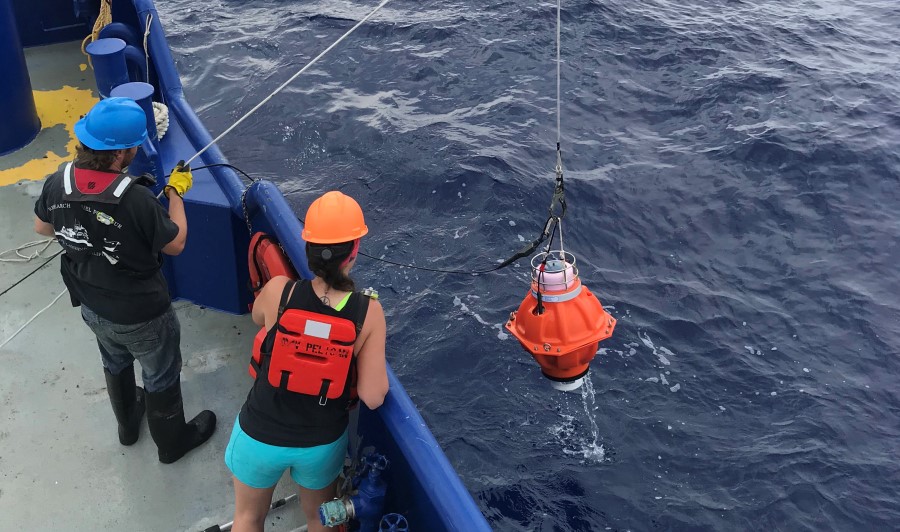