One of the UKs most ambitious robotics projects has proven the concept for robotic teams repairing offshore wind farms. This paves the way for human-robot teams at wind farms within 10 years and wind farms designed for robotic maintenance by 2050  a scenario that will be vital to the UK achieving its net-zero targets.
The £4 million MIMRee project, which was funded by Innovate UK, has concluded this month and reported on its drive to develop an autonomous robotic team for inspecting and repairing offshore wind farms. Two years since starting the project, the MIMRee team, including leading academics and technology developers, say they have successfully proven and demonstrated the core technologies at the heart of the concept.
Under the MIMRee scenario, a Thales autonomous mothership detects defects in wind farm blades using an onboard inspection system that can scan the structure of wind farms blades while they are still turning, sometimes at speeds of 200mph at their tips. The mothership then signals the blades to stop and launches a specially adapted drone that can transport a six-legged blade crawler onto them to effect repair.
The Offshore Renewable Energy (ORE) Catapult, which has led the project, believes that within 10 years this scenario will be feasible at offshore wind farms with robots working semi-autonomously (that is, under the remote supervision of humans and only requiring technicians for intervention offshore when essential).
By 2050, such a system could be capable of planning its own missions and conducting them autonomously at wind farms of the future that are built for repair by resident robots. ORE Catapult estimates that this move will shift workers from hazardous environments at sea to onshore control room roles and reduce the cost of energy by 10% (including a 27% reduction in operating expenses).
"This is not just a way for the sector to reduce costs, it is essential if the offshore wind industry is to achieve the scale of expansion needed for Net Zero, said Ben George, who leads ORE Catapults Operations and Maintenance Centre of Excellence (OMCE). "Today, conditions at sea make human-only missions subject to safety risks, delays, cancellations and extensive turbine downtime. This will not be a feasible way of running the super-sized offshore power stations of tomorrow that lie in deep waters hundreds of miles from shore.
The inspiration for the project was drawn from space exploration, the epitome of an extreme environment. Professor Sara Bernardini, who previously worked on mission planning for space mission operations, including the NASAs Mars Exploration Rovers programme, developed the AI system that controls how the MIMRee robots work together and communicate with humans.
"Space provides a good example of humans working with robots. The current Mars exploration programme uses a team of robots, from helicopters to rovers, that can withstand extreme conditions. Astronauts are deployed selectively, where human ingenuity is most needed and risk to life is lowest. Likewise, future offshore work will be about humans being in the control room, developing and managing robotics and learning the skills required to work in teams with them, comments Professor Bernardini.
Another crucial technological breakthrough was developing a robots ability to repair blades. The BladeBUG robot was lent to the project by BladeBUG Ltd, a London start-up that has previously achieved the worlds first robotic blade walk at a working offshore wind turbine.
Wootzano Ltd fitted their patented electronic skin, used in harsh environments such as nuclear decommissioning and applied it to the feet of the crawler robot. The Wootzkin allows robots to navigate around slippery wind turbine blades monitoring for slips and avoiding falls whilst carrying out repairs.
The Royal College of Arts Robotic Laboratory developed the repair module that is capable of cleaning and recoating damaged blades.
Drone technologies were adapted to take-off and land on the autonomous vessel when it is moving at high speed while it is carrying the blade crawler. This phase of the work was led by the University of Bristol, University of Manchester and Perceptual Robotics.
Ben George concludes: "This project has proven that such a system is possible and can handle the extreme environments at sea. We have tested each of its components in real-world settings, including at our offshore demonstration turbine off the coast of Scotland. Weve also developed a hardware-in-the-loop simulation system that allows individual robots to connect to a simulated environment so we can fine-tune their team behaviour before they go into field. It is highly significant that these technologies are being developed and demonstrated first in the UK  this puts us in pole position for a fast-growing global export market.
Dr Paul Gosling, Chief Technical Officer for Thales in the UK, said: "Increasingly we are seeing the technologies around robotics, autonomy sensing and AI providing solutions enabling activities involving harsh environments to be undertaken using unmanned systems. The MIMRee work is a perfect example of a UK team of experts using this evolving technology to benefit society and the environment in the future. I am delighted Thales was able to contribute its expertise in the form of the autonomous mothership and camera sensing technology to make this activity a success.
BladeBUG's blade crawler climbs a blade at ORE Catapult's offshore Levenmouth Demonstration Turbine. Courtesy of BladeBUG Ltd/Tony Fong. 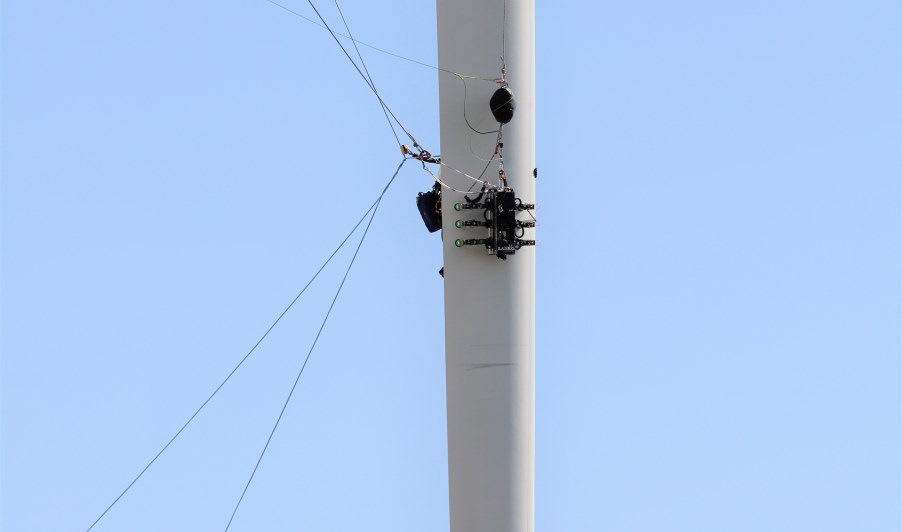