The UKs National Oceanography Centre (NOC) is working on behalf of the Government of Saint Lucia through the Disaster Vulnerability Reduction Project (DVRP) to install three new tide gauges to help reduce the islands vulnerability to natural hazards and climate change. The network of tide gauges will continuously measure and report sea level and tidal variability, providing valuable information to local seafarers and port authorities, as well as being an important addition to the Caribbean Early Warning System (EWS) for tsunamis and other coastal hazards (Caribe-EWS).
Alongside an existing tide gauge installed by the NOC under the Commonwealth Marine Economies Programme in 2016, the data from these gauges will be transmitted in near real-time to the Sea Level Station Monitoring Facility, enabling the data to be publicly accessible globally.
With the frequency of coastal inundation due to storm surges projected to increase and global mean sea level likely to rise by up to 0.23m by 2050*, the installations will help local planning authorities to decide how high to build coastal defences to protect coastal populations from the dangers of flooding. In addition, the gauges will enable the Saint Lucia Meteorological Service to produce tide tables that show times and heights of sea level to aid safe navigation and port operations.
Dr Angela Hibbert, Head of Sea Level and Ocean Climate at the NOC, said: "Low-lying communities are particularly vulnerable to the impact of sea level rise, so improved data collection is vital to inform coastal adaptation measures for Small Island Developing States like Saint Lucia, where infrastructure and populations are often concentrated in coastal areas.
"Installing the network of tide gauges is an exciting development for the island that will help benefit many different stakeholders by protecting the coastline, communities, infrastructure and trade and enabling government authorities to prepare for and mitigate the impact of natural disasters and climate change.
Mr. Claudius Emmanuel, Permanent Secretary of the Department of Economic Development with responsibility for the DVRP echoed the sentiment of Dr Hibbert, saying, "The installations represent Saint Lucia moving one step further in the direction of coastal communities that are resilient to climate change and natural hazards. The importance of early warning systems in saving lives and of reliable, long-term datasets in decision making to protect communities should not be underestimated.
Beyond the disaster risk reduction and climate adaptation applications, the tide gauges will also support enhancement of Saint Lucias geodetic network, allowing the calculation of datums (such as mean sea level) which can be used as starting or reference points for maps, property boundaries, construction surveys and other similar work.
Installation of the three additional tide gauges at Dennery, Soufriere and Vieux Fort was completed in October, and the Saint Lucia Meteorological Services assumed responsibility for operation and maintenance of the tide gauges. As part of the installation, the NOC offered training to officers from key stakeholder agencies including the Saint Lucia Meteorological Services, Department of Physical Development and Urban Renewal, the National Emergency Management Organization, Department of Sustainable Development, Department of Fisheries and the Saint Lucia Air and Sea Ports Authority. The government is also hosting a series of awareness-raising activities to inform residents and other key stakeholders from the representative communities of the tide gauge installations and their benefits. 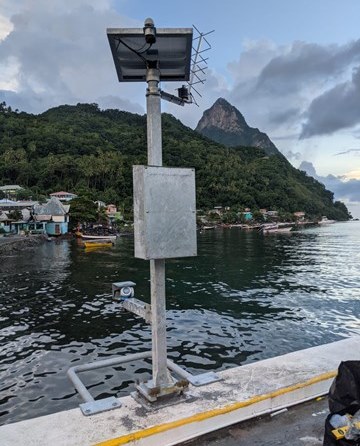