Following Osbits recent acquisition by Venterra Group, its founder, Executive Chairman, and subsea engineering innovator Dr Tony Trapp MBE has decided to retire, as he moves on from the industry after a hugely successful career spanning over 50 years.
Among many career achievements, Tony completed a PhD in Agricultural Engineering at Newcastle University and then used his expertise to pioneer the world of subsea trenching for the emerging telecoms, oil & gas, and renewable energy industries.
During his career, he built and led three hugely successful offshore engineering companies in North-East England, namely Soil Machine Dynamics (SMD), The Engineering Business (which was later acquired by Royal IHC), and Osbit.
A fellow of the Royal Academy of Engineering, in 2017 Tony was awarded MBE for services to the engineering and energy industries, and in 2020, he was presented with Subsea UKs Outstanding Contribution to the Subsea Industry award. Tony also has honorary doctorate degrees from Newcastle and Northumbria universities.
Non-Executive Directors Steve Agar, Rosamund Blomfield-Smith, and Terry Courtney have now also left the board, following Osbit becoming a Member Company in Venterra Group.
Joint Managing Directors Brendon Hayward and Robbie Blakeman will continue to lead Osbit, along with existing Directors Steve Bedford and Ivan Todd who will be joined by several colleagues, to provide continued operational excellence.
Osbit gains access to the experience and expertise of Venterras board, which is comprised of a group of offshore industry experts, led by Petrofac founder and entrepreneur Ayman Asfari.
Osbit Joint Managing Directors Robbie Blakeman and Brendon Hayward said: "We would like to take this opportunity to thank Tony for his hugely valuable contribution, not only to Osbit, but to North East England, and the global offshore engineering industry as a whole.
From helping to develop subsea burial and growing multiple North East engineering businesses, to delivering highly innovative offshore wind systems, Tony has made a truly unique and global impact in his career. The strong foundations and special culture Tony helped to build at Osbit remain essential to our continued success, as we move forward.
Tony and the departing directors leave the business in great shape for continued growth, with a strong brand in offshore energy, a youthful, dynamic culture and an impressive track-record for innovative engineering delivered On Spec, Budget and In Time. Venterra will support Osbit to become a significant player in the transition to renewable energy.
These are very exciting times for Osbit, Venterra Group, and the global offshore wind industry. Wind energy is key to our future, and Osbit has the world-leading expertise to deliver the equipment needed. We are already working very closely with our new colleagues to realise our shared vision of helping to accelerate the worlds energy transition through wind power.
Dr Tony Trapp said: "I have hugely enjoyed my 55-year engineering career, starting out with Alan Reece as my BSc Tutor and PhD supervisor at Newcastle University, then five years lecturing at Edinburgh University, and subsequently developing subsea vehicles in the oil & gas and telecoms revolutions. I am delighted to have helped lead three North East England engineering companies, which all became world leaders in their fields.
A common thread in my career has been the pleasure of working with many truly exceptional people, watching them grow and flourish. It is great to see the Osbit sale proceeds shared with almost all Osbit staff.
Nothing lasts for ever, and I now hand over to the team at Osbit and Venterra. The sale of Osbit to Venterra is a success for everyone and I will watch, with anticipation, as it all develops.
Venterra Executive Chairman Ayman and his team have exciting plans, and I am hugely impressed by the vision and energy that he has inspired in the Group. I hope that Osbit and Venterra make a huge impact in the global offshore wind market as it grows and matures.
Venterra CEO and Osbit statutory board member Rob Jewkes said: "Tony Trapp pioneered technology which is now crucial to the offshore wind industry. He built a great company in Osbit and were proud that it has joined Venterra as one of our first member companies, working to support the offshore wind industry and help it play a significant role in the energy transition.
Osbit Director and long-time colleague Steve Bedford presenting Dr Tony Trapp with a leaving gift at The Common Room 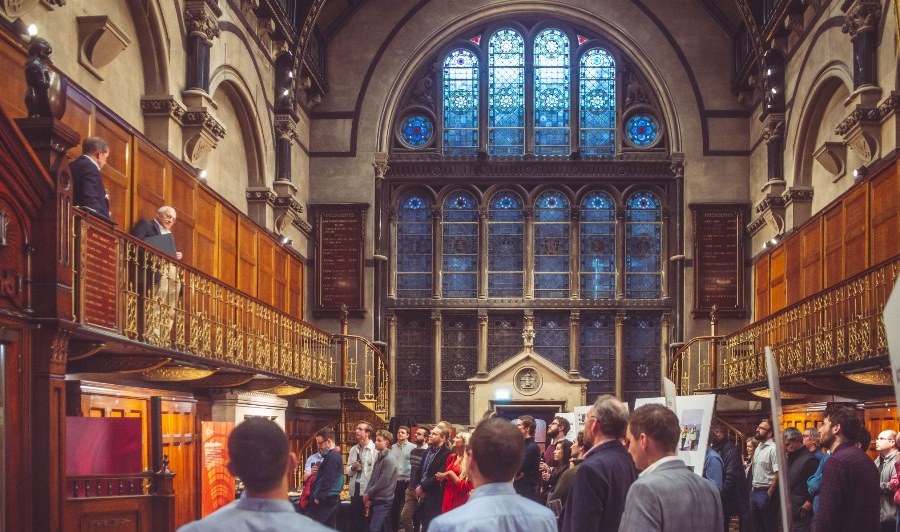