View all news from: EODEX
View directory entry for: EODEX

Aberdeen-based EODEX and partners Alford Group teamed-up with legendary actress Joanna Lumley and marine conservation charities to support the #StopSeaBlasts campaign.
The Absolutely Fabulous actress Joanna applauded the government's decision to signal its aim for undetonated explosives found in the sea to be cleared using quieter, less invasive methods.
Speaking as part of the Stop Sea Blasts campaign, the 75-year-old star lauded the decision as "a victory of common sense
She has been tirelessly campaigning for the more environmentally-conscious methods for disposing of explosives, as the blasts previously threatened marine life.
Joanna and the team had been calling for a change in how unexploded war munitions retrieved from the sea are disposed of. This new method will see the explosives being neutralised in a quieter fashion in order to cause minimal disruption to marine habitats.
Reacting to the Government announcement, Joanna Lumley, actress and spokesperson for the www.stopseablasts.org campaign said:
"I'm thrilled that today the Government has, as far as I understand it, for the first time, clearly stated that using more environmentally friendly of clearing these unexploded bombs such as low order deflagration is the way forward. This is a victory for common sense.
"I thank the Ministers for taking this bold step as well as all the supportive MPs and Peers who have got behind this. And of course, I thank the 120,000 people who supported this campaign. Days like this show just what can be achieved. Of course, there'll be matters of detail to resolve. But today is a wonderful day for all those who care about our seas and the magnificent creatures that live in them.
Andrew Woollven, Managing Director of EODEX added:
"EODEX is delighted to have directly supported Joanna Lumley and has been intrinsically involved in every stage of the #StopSeaBlasts Campaign. The Government's decision paper now identifies Low Order deflagration, in which we lead the commercial world, as the preferred option for clearance of UXOs for subsea projects which is an enormous victory for marine biodiversity.'
This statement comes after the government published a policy paper published on Tuesday, claiming it supported the use of "lower noise alternatives" in place of what it calls "high order detonation".
This change in perspective comes with the recognition that marine wildlife can be injured by the sound from blasts.
Stop Sea Blasts clearly warned of how detonating unexploded devices threatens the survival of whales and dolphins in their campaign, which helped highlight the damage the issue currently causes.
A technological alternative to the loud explosions is low order deflagration, which the group says involves a small magnesium cone being fired at the device "causing its explosive contents to burn out from the inside.
When model Joanna met with like-minded people near Westminster on Tuesday afternoon, she said that the deflagration method is 100 times less damaging, adding that adopting it was a "no-brainer.
A large amount of rockets, torpedoes and sea mines are still present after the two world wars, and it is important that these devices are dealt with before structures in the sea such as wind farms are built.
Earlier this year, EODEX which specialises in the safe and environmentally friendly removal and disposal of unexploded ordnance (UXO) around the world recently opened a new Scottish base at Aberdeen Energy Park in Bridge of Don.
L to R: Andrew Woollven, Managing Director of EODEX, Joanna Lumley,  Simon Morgan, Chief Executive Officer of EODEX and Jez Earnshaw, Chief Operating Officer of Alford Group 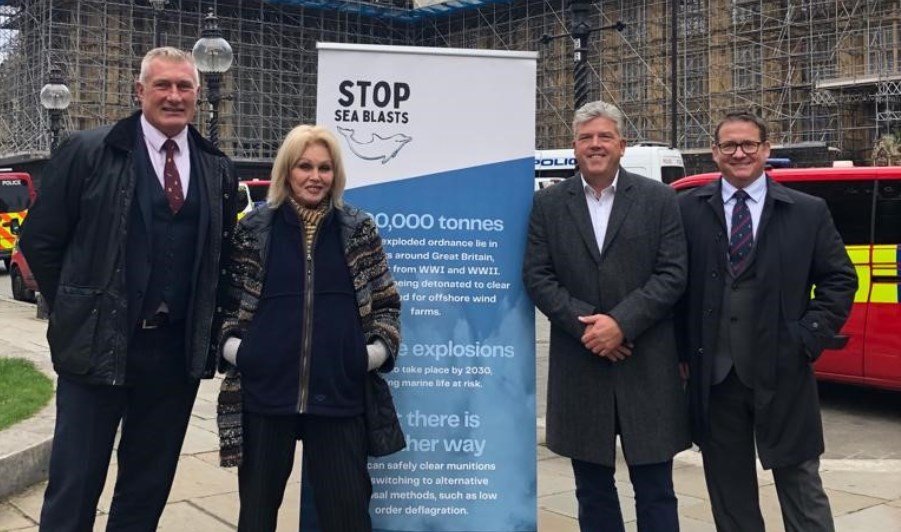