After more than 100 years lost more than 3,000 m underneath sea ice in the Antarctics Weddell Sea, the almost fully intact wreck of Ernest Shackletons Endurance has been found, supported with underwater navigation and positioning technology from Sonardyne.
The pioneering search, launched in February this year, saw the Endurance22 team deploy Saab Seaeye Sabertooth hybrid autonomous underwater vehicles (AUVs) from the icebreaking polar supply and research ship S.A. Agulhas II.
During their hunt of the seabed, close to where the 1914-1917 expedition came to its end, these underwater robots used Sonardynes SPRINT-Nav hybrid acoustic-inertial navigation system (INS) technology navigate their search routes. They also used Sonardynes AvTrak 6 tracking and telemetry transceiver, to send commands and position updates from a Ranger 2 Ultra-Short BaseLine (USBL) system, also from Sonardyne, onboard the S.A. Agulhas II.
"It is amazing what the team have achieved, given the extreme depths and under ice conditions they were working in, says Geraint West, Head of Science at Sonardyne, who has himself been involved in hunting for wrecks in the Antarctic. "The stunning condition of the Endurance as it rests on the seabed, like its been frozen in time, really is astounding and beyond our wildest hopes.
"Were thrilled that it was our positioning and navigation technology and expertise that were chosen to support this what can only be called extreme science mission and we congratulate the Endurance22 team on their historic discovery. Im sure this is also just the start of the story, as we begin to learn more about remains of this historic ship.
For ease of deployment, the Ranger 2 was configured with a Gyro USBL transceiver This comes with inbuilt attitude, heading and reference sensor (AHRS) and is pre-calibrated, making it easy to deploy on vessels of opportunity. A second Ranger 2 Gyro USBL system was also on hand, ready to be deployed from the surface of the ice, if the S.A. Agulhas was unable to get through the Weddell Seas sea-ice. Both were LMF systems, enabling tracking at ranges beyond 7,000 m, to meet the Endurance22 teams potential under-ice tracking requirements.
Sonardynes sister company, Voyis, also had equipment on the project. Its Insight Pro and Observer stills camera were integrated into the Saab Sabertooth to generate 3D models and capture high-resolution true colour images of the wreck, all geolocated by Sonardyne navigation data.
One of the Endurance22s two Saab Seaeye Sabertooths, showing the blue cap of Sonardynes AvTrak instrument near the front of the vehicle. Photo credit: Esther Horvath, Falklands Maritime Heritage Trust. 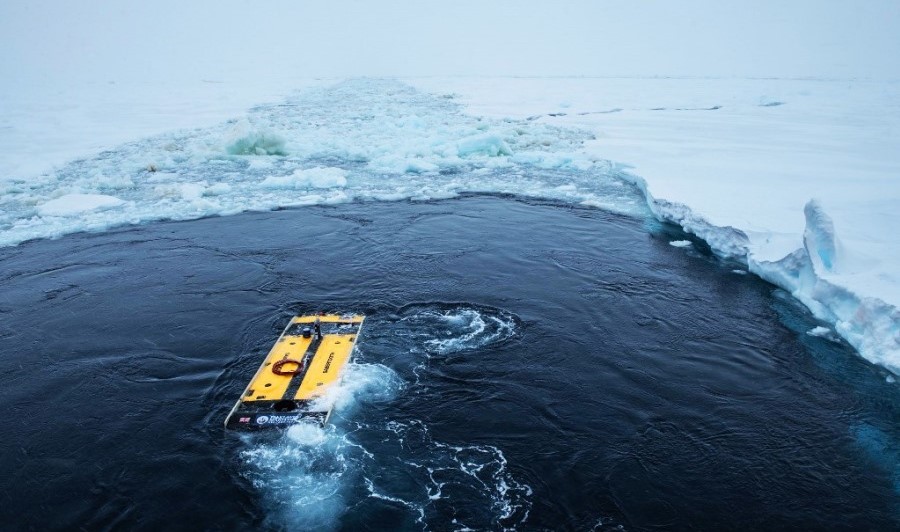