The duo, whom both achieved a Bachelor of Arts (Hons) degree in Business Administration, attended RGUs graduation ceremony at the P&J Live yesterday (Weds, 14th December 2022), when they received their certificates.

As one of the first companies in Scotland to support graduate-level apprenticeships, EnerMech introduced the personal development opportunity to its employees in 2018. The Skills Development Scotland programme, developed specifically to support the energy industry, uses a blended learning approach which allows students to apply their theoretical learnings to their practical, on-the-job work.

Callum began working at EnerMech in 2013 after completing a Modern Apprenticeship as an electrical technician with the NHS the year prior. Starting his career with the business as an offshore electrician, he progressed into a contract support engineering role before beginning the new challenge of his undergraduate degree. Since starting his studies, Callum has experienced a couple of major life changes; he became a father for the first time eight months ago and was recently promoted to account lead.

Callum said: "Having achieved a HNC in electronics when I left school, I had always been determined to progress my studies at some point in my life. I am incredibly grateful to EnerMech for providing this opportunity and to my partner, who has been incredibly understanding and an amazing support both before and since the birth of our son earlier this year.

"The RGU programme helped me to further understand why we do what we do, underpinning my existing expertise and extending my knowledge and skills. I had the full backing and endless encouragement from my EnerMech mentors throughout the past four years, and I am proud to carry this baton on and am currently mentoring a couple of colleagues now progressing through the course.

Iain, a project accountant, had worked in financial services for more than 30 years prior to becoming a Graduate Apprentice. Having moved into the energy sector in 2013, he joined EnerMech as a lead management consultant in 2015. Iain had achieved a HNC in accounting when he left school but had never considered pursuing higher education until EnerMech approached him with the opportunity.

Iain said: "As well as my HNC, I have several professional qualifications Ive achieved over the years. Completing an undergraduate degree is not something Id thought possible after working for more than three decades and am therefore beyond proud to have accomplished a BA (Hons) degree. I would strongly recommend this blended programme to anyone considering it and cannot thank EnerMech enough for the support they have provided throughout the whole process.

EnerMech has a long-standing alliance with RGU, having initially partnered with the university in 2014 to create a bespoke 12-month project management course for its engineers.

There are currently 10 students from the organisation at different stages on the RGU Graduate Apprenticeship programme, with ongoing plans to continue supporting more personnel to enter the scheme. Seven mentors from across EnerMech are also dedicated to assisting their colleagues throughout the four years of training.

Christian Brown, CEO of EnerMech, said: "We are very pleased and proud to see our first employees, Callum and Iain, achieving their Graduate Apprenticeship degrees  many congratulations to both.

"The RGU programme has provided significant value to our business. The syllabus and on-the-job learning have provided a great springboard for our employees careers by helping to deepen their competencies and capabilities. Simultaneously, both Callum and Iains final year projects have also made a positive impact on our operations. They both chose final thesis topics which have helped to identify and increase efficiencies aligned to our ongoing growth targets, demonstrating that their hard work and dedication over the past four years has truly paid off. 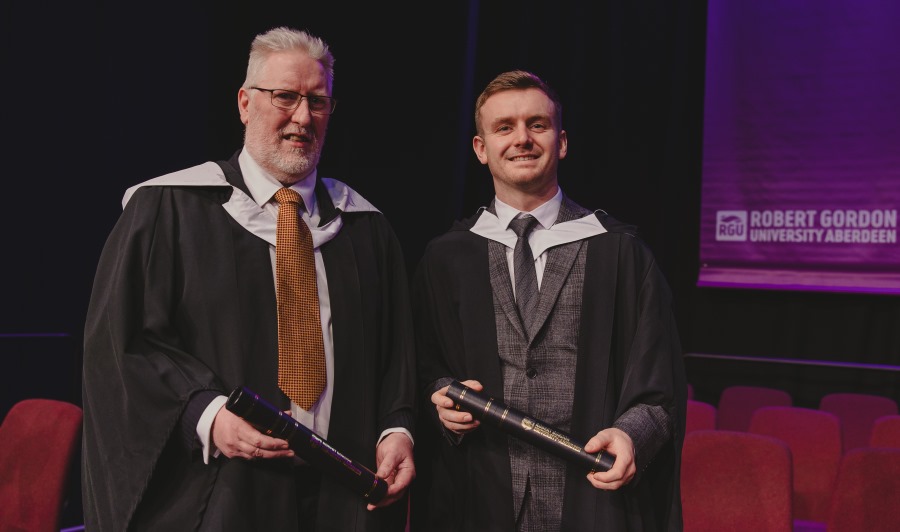