A leading scientist at the National Oceanography Centre (NOC) has discovered that changes taking place in the way the ocean and atmosphere interact in the Mediterranean Sea are threatening the normal connection between the upper and deep ocean layers in this region.
Professor Simon Josey, from the Marine Systems Modelling Group at NOC, in collaboration with Dr Katrin Schroeder from the Institution of Marine Science in Italy, has analysed new atmospheric data-models and found that the ocean surface in the North-West Mediterranean (NWMed) has lost less heat than normal in recent decades. This change reduces the movement of water from the upper ocean to the deep layers and has potential consequences for winter storms and summer heatwaves.
The study provides insight into the cause of the changes, showing that a warmer atmosphere is reducing the amount of heat the ocean is losing through its surface. The changes are strongest in the NWMed south of the French coast which is a key region for the Mediterranean circulation where the upper ocean water normally sinks to deep levels in winter.
Professor Josey said: "Air temperature has warmed more rapidly than ocean temperature which effectively puts an extra blanket over the ocean stopping it from getting as cold as it used to and reducing the ability of waters to sink to the deeper layers. It is also possible that the reduced ocean heat loss will have a knock-on effect on the atmosphere, modifying weather patterns in the region and the occurrence of extreme events including severe winter storms. 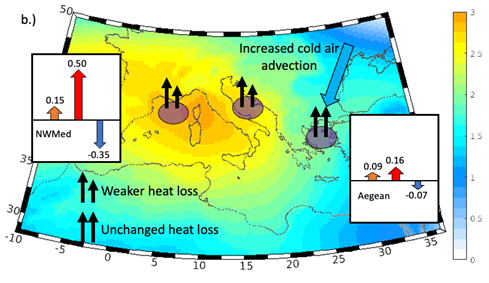 Infographic of the changes taking place in the Mediterranean Sea. Coloured arrows show changes in winter sea surface temperature (orange arrows), air temperature (red arrows) and sea-air temperature difference (dark blue arrows). Numerical values by the arrows are the temperature difference (1986-2020 minus 1951-1985). The map colours show changing atmospheric pressure with orange colours indicating unusually high pressure.
The study discovered that the air has warmed more quickly than the sea surface in the last 70 years in the NWMed but not in the Aegean Sea pointing to regional differences in the way in which ocean-atmosphere interaction is changing. As a result, the NWMed is not losing as much heat as it used to, and the normal ocean circulation there has now become threatened. A further study is planned to explore the implications of this and to assess the impact it will have on overall weather and climate for people living in this region, including France, Italy, Spain and north Africa. This area has already become known as a climate change hotspot as witnessed by the major heatwave in the summer of 2022, which saw June temperatures of 4043 °C in parts of Europe, with France experiencing multiple heat breaking records.
Professor Josey continued: "We found that surface ocean heat loss has weakened, and that winter sinking is now occurring only about half as often as it did 40 years ago, indicating that the normal flow of water between the upper and deep ocean has been disrupted. This may well have consequences for the wider ocean circulation, and it is imperative that we investigate this further with a climate model-based study to determine the impacts and possible feedbacks on the atmosphere including winter storms and summer heatwaves.